A wireless sensor with a cognitive radio (CR) is called a cognitive radio wireless sensor (CR-WS). Networks of these sensors collaborate for research or industrial and consumer applications, such as environmental monitoring, warfare, child education, surveillance, microsurgery, agriculture, wildlife monitoring and fire sensing. The CR-WS generates a packet burst whenever an event is detected, and might otherwise remain silent for a long time.

To protect the right of the PUs to access the channel, SUs have to monitor PU activity on a regular basis. If a PU claims a channel currently used by SUs, the SUs have to immediately leave the channel and inform neighboring SUs about the PU’s arrival on the channel. To flag PU activity and negotiate for the channel for data communications, most existing MAC protocols for CR-WSNs rely on a dedicated common control channel (CCC) [1]. The CCC is common among all nodes and, in most cases, it is assumed that this channel is not subject to PU intervention.

However, the CCC may get saturated, and can become a victim of a denial-of-service attack [2]. In addition, allocating just one channel for control packet exchange is a waste of resources for channel-constrained (e.g., 802.11b) networks [3]. Using the industrial, scientific and medical (ISM) band for a CCC is also a kind of violation of CRNs’ original principle.

In this work, we analyze how long it takes to access the channel under a cognitive radio media access control (CR-MAC) protocol for ad hoc cognitive radio wireless sensor networks without a dedicated CCC.

CR-WSNs are a specialized ad hoc network of distributed wireless sensors that are equipped with cognitive radio capabilities. In many ways, a CR-WSN is different from conventional WSNs and conventional distributed CRNs. The CR-WSN is an emerging research area, and research on them is still in its infancy. The detailed differences in various aspects among ad hoc CRNs, WSNs, and CR-WSNs were reported by Joshi et al. [4]

In the CR environment, it is not allowed to access a channel without proper information about PUs’ existence in that channel. It is very important for SUs to leave the channel whenever a PU claims it. For these reasons, most of the protocols for CR-WSNs are CCC-based. In our previous work, we analyzed channel access delay in a synchronized MAC protocol for CRNs [9]. To the best of our knowledge, this is the first work that analyzes channel access delay in ad hoc CR-WSNs without a CCC.

This paper analyzes a MAC protocol for a CR-WSN that requires no dedicated CCC. A prototype of such a protocol is described briefly. Each CR-WS node was assumed to be equipped with two transceivers; one for data packets and another for control packets. In the beginning, we assumed each CR-WS node knows how many channels can be accessed opportunistically, which is denoted by K. Whenever a node wakes up, it selects a channel to listen to and waits for a time period of length K × BI, where BI is a beacon interval fixed by a set design parameter. The BI was assumed to be a tolerable time period for PUs. If the wakened node does not receive any signal from other nodes within the K × BI time, the node declares itself the first node in the network. The first node divides the channel into BIs, and each BI is divided further into the default timeslot (τ) and Idata, as shown in Fig. 1. τ is a default time period for a particular channel and is slotted into Ns number of mini-slots. Idata is a combination of the data transmission time (I’data) and the channel switching time. The first node creates channel sensing sequence, senses the channel, and broadcasts a sync message at the beginning of the BI, and other nodes respond to the sync message, as reported by Sichitiu and Veerarittiphan [10]. 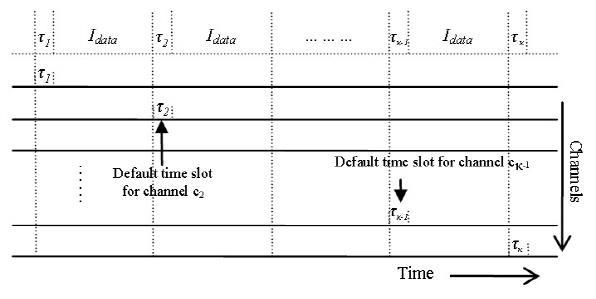 Fig. 1.Channels with their default timeslots.

After channel negotiation, the nodes begin sending data on the negotiated channel in the Idata period. After Idata, the nodes again rendezvous on another channel. This process continues in the same manner.

If a PU is sensed on the channel at the beginning of the default time, all the nodes hop to another channel without interfering with the PU, and they continue the process. In addition, if there are no control packets for a substantial period of time, the SUs assume the arrival of PUs on the channel. Because PUs can tolerate a unit of time up to one BI, a collision within the default time would be tolerable damage. In addition, before sending data packets in Idata, the nodes sense the channel, and if a PU detected, the SUs stop sending data packets.

The channel access delay was analyzed by the control transceiver in default timeslot τ. Table 1 lists the notation used throughout this work.

Table 1.Notations and their definitions. 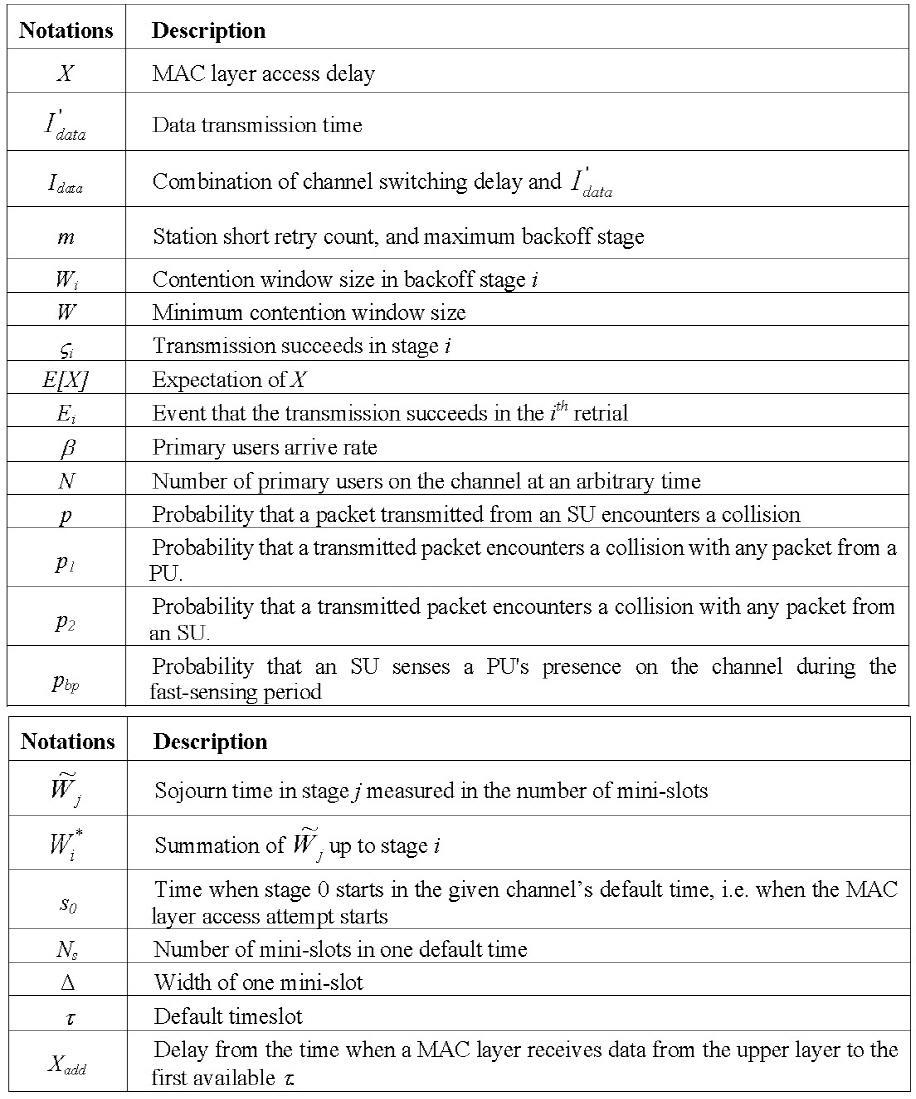 The contention model was considered, where the contention window size Wi in backoff stage i is determined to be

where W is the minimum contention window size, m is the station short retry count and m is also the maximum backoff stage. The expectation of the MAC layer access delay X can be expressed as

The following can be obtained by solving the set of equations iteratively:

Therefore, N has the following distribution:

If p denotes the probability that a packet transmitted from an SU encounters a collision, then

An SU will experience a collision if the channel is used by the PUs when the SU attempts to use the channel. Therefore, p1 can be approximated by of Eq. (4), if the mini-slot interval in the default time is negligibly short compared to the duration that the PU is active on the channel.

Let denote the sojourn time in stage j measured in the number of mini-slots, and let represent the summation of up to stage i, i.e. s0 denotes the time when stage 0 begins in the default time of the given channel, i.e. when the MAC layer access attempt begins. When Ns and Δ denote the number of mini-slots in a single default time and the width of one mini-slot, respectively, s0 can be assumed to be distributed uniformly as follows:

If Ei represents the event that the transmission succeeds in stage i, then

By assuming independence between s0 and can be expressed as

In cases where no PU is attempting to access the channel, then of Eq.(11) can be simplified as

If a PU is sensed during the fast-sensing period, SUs do not attempt to access the channel during that BI. Therefore, when Pbp is not zero, can be expressed by the expectation of negative binomial distribution as

Therefore, can be expressed as follows:

A closed-form formula for A(n,i) is difficult to derive, but it is possible to evaluate the value of A(n,i) numerically for given values of n, i and Wj using the following recursive formula and initial conditions: 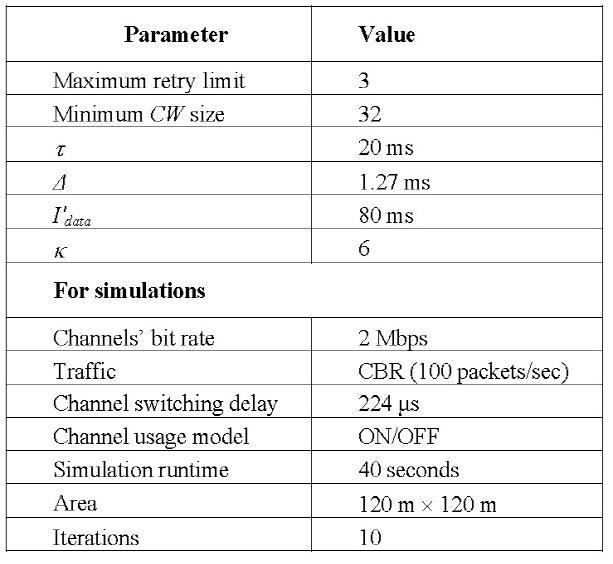 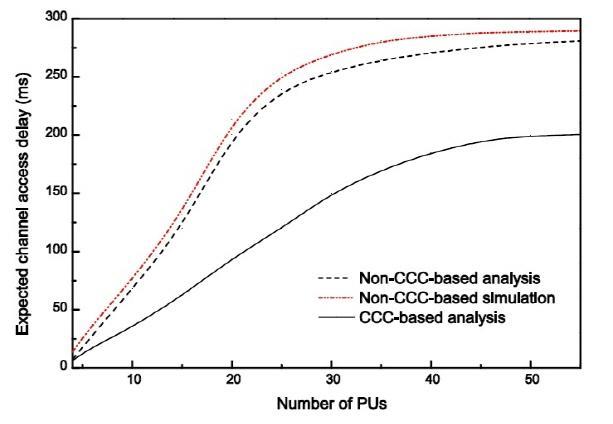 Fig. 5 shows the delay due to the number of SUs, whereas the number of active PUs is constant at five. Here, active PUs means the PUs have a packet to send. The figure shows that if the number of PUs increases, the channel access delay is higher, and vice versa. 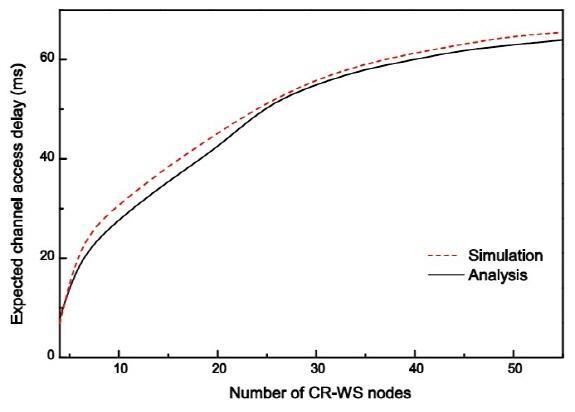 Fig. 5.Comparison of the channel access delay by analysis and simulation when the number of active PUs is 5.

This paper analyzed a non–CCC-based MAC protocol for CR-WSNs. The advantage of this protocol is that it does not require a dedicated CCC for control packet exchange. Therefore, it does not suffer from CCC bottleneck problems and saves bandwidth resources. On the other hand, this protocol requires tight time synchronization, which causes overhead. This protocol has a slightly higher channel access delay than the CCC-based protocol in the case of a dense network topology. The results suggest that CCC is necessary for dense CR-WSNs. The above-discussed non–CCC-based MAC protocol might be suitable for non–delay-sensitive applications and/or sparse-network scenarios.

The CCC-based MAC protocol has issues as to how to obtain a dedicated CCC channel to negotiate exclusively for control packets. The present study showed that it is possible to communicate opportunistically with no dedicated CCC channel. The tradeoff is that it incurs a delay in cases of dense SU deployment.